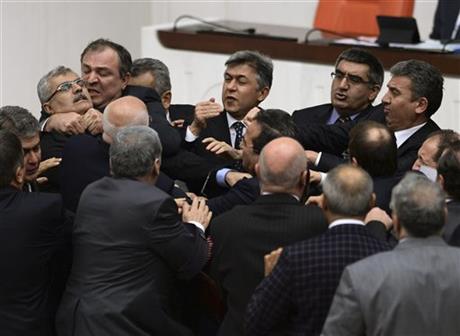 ANKARA, Turkey (AP) — Turkey’s parliament has approved a bill that would tighten the government’s grip on a judicial body after a tense, all-night session that saw two legislators injured in a brawl.

The legislation, which would give the Justice Ministry increased control over a council which appoints and oversees judges and prosecutors, was endorsed Saturday.

Prime Minister Recep Tayyip Erdogan’s government proposed the bill as it fights a corruption scandal that implicated people close to him.

Erdogan claims the corruption charges are a conspiracy orchestrated by followers of an Islamic movement which he insists has infiltrated the police and judiciary. The opposition says the bill, which still needs the president’s approval, limits the judiciary’s independence.

Media reports said one legislator was hospitalized with a broken nose. Another broke a finger.