(Lancaster Online) While visiting Ethiopia, the land of her birth, Patience Buckwalter, 25, met her birth sister, a somber, impoverished mother of three hobbled by a deformed foot.

Buckwalter, a Lancaster mom, was struck by the contrast in their lives. On returning home, she felt called to do something to make life better for 30-year-old Aragash. 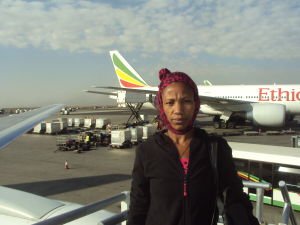 After months of planning and fund-raising last year, Buckwalter succeeded Jan. 10 when a Lancaster surgeon operated on Aragash’s foot in Cameroon.

She also recruited orthopedic surgeon Dr. James Carson of Lancaster, who donated his time in the operating room as part of a 10-day missions trip to MBingo Baptist Hospital in Cameroon.

Today, Aragash is back home in Ethiopia’s western hinterlands in a cast and using crutches. She should be walking unassisted by April 3.

“She’s happy that she has another chance,” said Buckwalter, who grew up in the United States, having been adopted as an infant by a mission’s nurse. “She took that leap of faith that we would take good care of her.”

As a child, Aragash suffered an injury that turned her right foot onto its side, disabling her ever since.

Carson said he operated for about 45 minutes, inserting a pin and fusing bones to restore the foot to a normal position.

He said Aragash should be able to walk normally on level land, but she won’t be able to turn the foot to the left or right.

It was Carson’s third trip to the West African country as a volunteer with the Pan-African Academy of Christian Surgeons. When Buckwalter enlisted the surgeon’s help for Aragash, he suggested she schedule the surgery during his time in Cameroon, sparing her the expense of flying Aragash to the United States.

The 3,000-mile flight from Ethiopia to Cameroon was a first for Aragash, who lives in a thatched hut with her husband and three children, ages 9 to 3.

The trip was the adventure of a lifetime for Aragash, Judy Buckwalter said, and the young woman never seemed anxious.

“We couldn’t communicate very much” because of the language difference, said Judy Buckwalter, who was a nurse in Ethiopia in the 1980s. “She just would smile a lot.”

Patience Buckwalter, a social worker at McCaskey High’s parenting program, said the months of arranging the trip and raising funds was a test of stick-to-it-ive-ness.

A congratulatory email she received from an English-speaking Ethiopian teacher offered a glimpse into the difference she was making in a faraway place close to her heart.