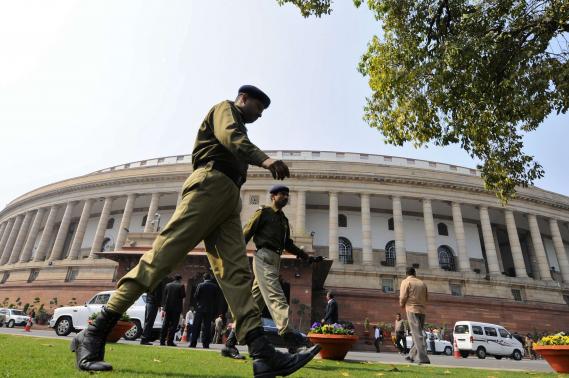 (Reuters) – India’s parliament erupted in mayhem on Thursday when a legislator fired pepper spray in the lower house in protest against a bill on a new state.

Television footage showed pictures of lawmakers coughing, sneezing and holding scarves to their faces. Shouting protesters also broke a glass table and snapped the wire of an official’s microphone.

A few legislators were rushed away in an ambulance while others were given first aid treatment in the assembly.

“The incidents which took place in the house are a big blot on our democracy,” Parliamentary Affairs Minister Kamal Nath told reporters.

“Parliamentary democracy provides for dissent but does not provide for the kind of disruption and attempted violence which we saw today. I feel ashamed that such an incident has taken place.”

The furor erupted after Home Minister Sushilkumar Shinde rose to table a bill for the creation of a new state, Telangana, to be carved out of the southern state of Andhra Pradesh.

Lagadapati Rajagopal, a legislator from Andhra Pradesh who was recently suspended by the ruling Congress party, and who opposes creation of the new state, then unleashed the pepper spray.

Congress has tried to pass laws in the parliament’s last session before a general election due by May, but the house has frequently been adjourned amid rowdy scenes over the creation of Telangana state.

Thursday’s antics were the worst and drew criticism from parliamentarians from various parties.

“It is an unprecedented and a disgraceful situation,” said Jaswant Singh of the main opposition Bharatiya Janata Party.

The bill was tabled but the session broke up soon after. The speaker suspended 17 members of parliament.