Mass grave is uncovered over the weekend in Janmeda neighbourhood of Addis Ababa indicates a report shared on golgul newspaper facebook page. Estimated six human remains were uncovered in a Military barrack in Janmeda and were all wrapped in locally produced blankets. 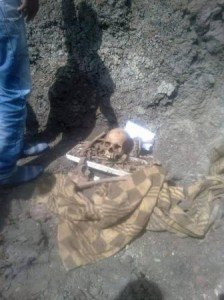 Apparently, the remains were uncovered accidentally during excavation for road construction. Construction workers initially discovered two human remains and further excavation in the same area uncovered four more human remains. Military officers are reported to have arrived at the scene and give orders to suspect the construction work. Whether more remains would have been uncovered or not is a question if the work was indeed temporarily suspended.
Sources close to Semayawi party who were at the scene to document the unexpected finding of human remains are reported to have been threatened by military officers in the scene.

The blankets used to wrap the corpse seem to foster speculations that the killings are likely to have been committed under the ruing TPLF/EPRDF government.