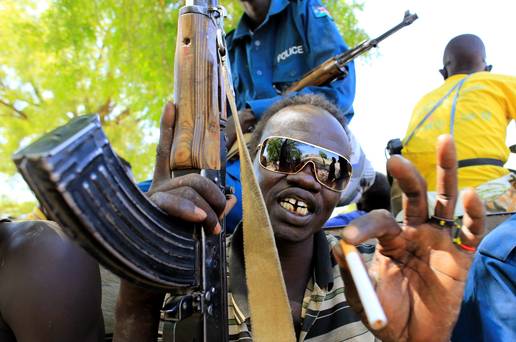 South Sudan‘s government agreed to end hostilities, regional leaders said at the end of a crisis summit, raising hopes for a potential breakthrough in efforts to cease violence that has displaced more than 120,000 people in the world’s newest country.

East African leaders meeting in Kenya under a bloc called IGAD said in a statement that they “welcomed the commitment by (South Sudan’s government) to an immediate cessation of hostilities”.

But former vice president Riek Machar, President Salva Kiir’s political rival who is accused of orchestrating a failed coup that the government says sparked unrest across the oil-producing country, was not represented at the summit in the Kenyan capital of Nairobi.

IGAD said it opposes a violent change of government in South Sudan and urged Mr Kiir and his rivals to start peace talks before the end of 2013.

In a speech at the summit, Kenyan President Uhuru Kenyatta noted that there is “a very small window of opportunity to secure peace” in South Sudan, where fighting since December 15 has raised fears of full-blown civil war.

South Sudan broke away from Sudan in 2011 after decades of a brutal war of independence. The young country has been plagued by corruption, ethnic tension, and a power struggle within the ruling party.

Meanwhile, Irish AID agency GOAL has evacuated Irish staff from South Sudan as the area teetered on the brink of all-out civil war.

The charity has confirmed that 25 international staff, including two Irish personnel, have been withdrawn and relocated in neighbouring Kenya.

All non-essential staff were relocated on December 18, 22 and 23, the charity said.

However, “national staff” will continue to run 34 primary health clinics and deliver other programmes in various parts of the country.

The top UN humanitarian official in South Sudan, Toby Lanzer, said earlier this week that he believes the death toll has surpassed 1,000.