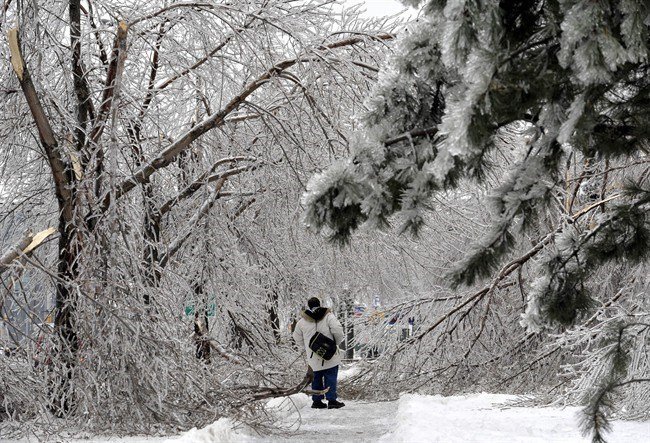 TORONTO – A nasty ice storm that left hundreds of thousands without power in Ontario and Quebec tracked through the Maritimes on Monday as authorities worked frantically to clear tree-strewn roadways, restore downed hydro lines and get stranded travellers to their destinations.

The weekend ice storm in southern Ontario may also have contributed to the deaths of two people in the town of Newcastle, east of Toronto, from carbon monoxide poisoning.

Police said a 52-year-old man and his 72-year-old mother died Monday afternoon after trying to keep warm with a gas generator. The generator was in an adjoining garage to supply electricity to the house, but the fumes managed to seep inside the home.

A fire official said that in Toronto alone on Monday night, 11 people were taken to hospital showing signs of carbon monoxide poisoning. Capt. David Eckerman says firefighters received 41 calls for carbon monoxide, including one case in which people were using a charcoal barbecue to provide heat.

Hydro companies in the Greater Toronto Area _ which appeared to be the hardest hit by the weather system _ warned some residents to brace for the possibility of being without power until Boxing Day or later.

Some neighbourhoods resembled crime scenes with yellow police tape used to cordon off areas where electric wires or large trees had come crashing down over the weekend. Sidewalks around some high rise buildings were also closed off due to the risk of falling ice.

Meanwhile, travellers trying to get home for the holidays continued to face delays and cancellations on airlines and trains.