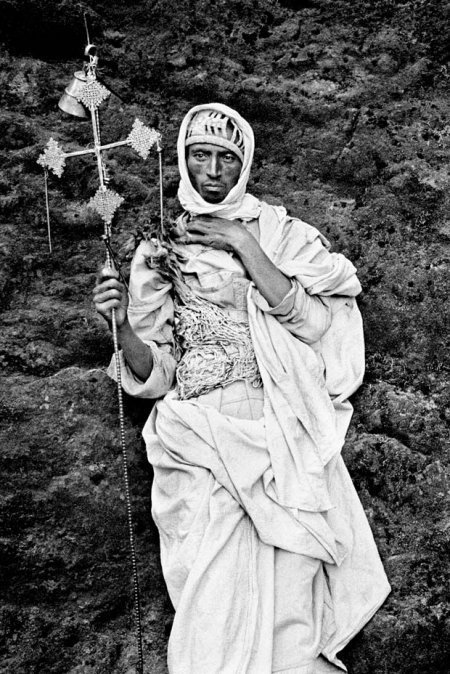 Written by Missla Libsekal on Dec 24, 2013 in Art & Culture, Photography

The first time I laid eyes on the portrait of a young priest, whom I immediately recognized to be Ethiopian, I was mesmerized. Not only for its scale, standing more than a meter tall, or for the setting, the equally impressive Parisian establishment SOME/THINGS. It was that in this private enclave of creative acumen, old worlds and new could and did meet. That images of Ethiopic traditions, of a so called black byzantine could marry so naturally with avant grade furniture and other artifacts so firmly entrenched in a modern worldy aesthetic. This rare medley, at least within a western context, unexpectedly finding a home in Paris’ 11th arrondissement. So it was there, that I first discovered the images of Greek photographer, Athina Kazolea.

My conversation with her on this image and the larger body of work that constitutes, Northern Ethiopia The Christian Highlands would come almost a year later. Though I was born in Ethiopia, my knowledge of its long religious history was limited to the photo books that my parents had of Lalibela, the hand bound hymnal owned by my grandfather and the paintings of religious iconography on stretched goat skin canvases that decorated our home during my childhood. In her work, I would find myself redrawing the lines, to connect to a visual history that I had grown up surrounded by, but in truth knew little of.

Like every novice interviewer, I began with the obvious and easy question. Kazolea had not lived or worked in Ethiopia, so I asked how she had come to visit? Her answer “a happy accident.” She had received a recommendation and later that year, in 1999 she would head south to spend Christmas in the highlands. Her feet touching east African soil for the first of many times. What she described as an accident, the opposite of catastrophic, was the entrusted advice of a friend.

This period would open a new chapter for Kazolea – a transition where her photographic practice would take her beyond Greek borders. With hindsight reflection, she mentions that two places have marked her life, her way of thinking and heart. They are Palestine and Ethiopia. Read more…