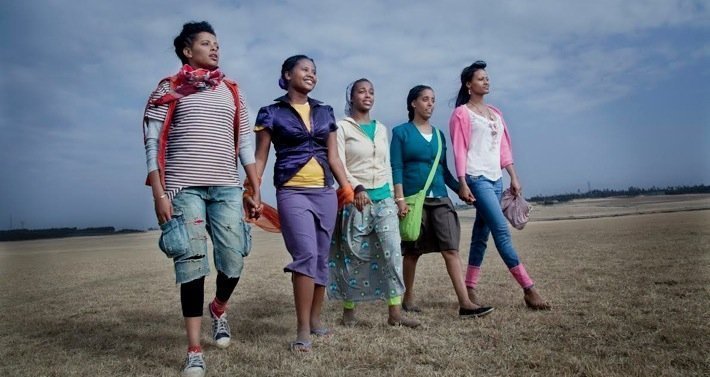 Whilst both Yegna and the Spice Girls were deliberately manufactured, comparisons between the Ethiopian girl group and their British predecessors are simplistic. Yegna are not in it for the money or the fame.

It’s a cold and wet afternoon in Addis Ababa and the girls from Yegna (pronounced yen-ya) – Ethiopia’s first and only manufactured pop band – straggle in late for their interview. Shaking off the rain from their umbrellas and clothes they greet each other warmly with smiles, kisses and hugs, excitedly chatting and giggling amongst themselves.

Out of the distinctive costumes they sport on the giant bill boards adorning the city, it’s difficult to recognise Mimi, Melat, Lemlem, Sara and Emuye – the fictional friends from very different backgrounds that make up Yegna, the lives and performances of whom are traced in a weekly radio drama series.

Mimi is the streetwise street-girl, surviving on her wits. Studious Sara is stifled by her overprotective family. Melat is a sophisticated socialite with an attitude to match. Lemlem, a caring country-girl, is struggling to balance duties at home and her life in the band. And the effervescent Emuye has to cope with a physically abusive father.

In time-honoured teen tradition, their camaraderie – and their music – makes them stronger.

Since it’s launch in April, the show has developed a loyal following. “Many people are listening to the drama,” says Zebiba Girma, who plays Emuye – her character’s struggle against domestic violence formed the main story arc of the first series.

“I’ve received calls from old friends and a teacher saying that they heard me on the radio,” she continues, adding that everyone at the shoe factory where her uncle works listens to the programme each week.

Yegna’s first video, Abet, is one of the top ten most watched Ethiopian pop promos of all times. It has been viewed online more than 500,000 times and has become a staple on the ETV, the main Ethiopian broadcaster.

The song was also remixed and has been a massive hit in the clubs in the capital, Addis Ababa. Their second video, Taitu, directed by Darren Grant who has worked with Destiny’s Child and India.Arie, was released on 29 November, 2013.

The group was put together by Girl Hub, a joint initiative of the Nike Foundation and the UK’s Department for International Development, which seeks to transform the lives of adolescent girls living in poverty.

Those in Ethiopia face particular hardship – almost 7 million adolescent girls live on less than $2 per day; half of all girls are married by the age of 15; nine out of ten girls need permission to leave their house; and one fifth of Ethiopian girls say that they have no friends at all.

Yegna (which means “ours” in Amharic) hopes to change this by creating role models and highlighting critical social issues facing girls in Ethiopia – early marriage, teenage pregnancy, dropping out of school and domestic abuse.

By using the popularity of the band and addressing problems raised in each episode during a talk show which airs immediately after the drama, Girl Hub aims to break entrenched behaviours.

That transformation has started with Yegna themselves. “I used to hear a lot before about rape and violence but I would just listen and that was it. Now I ask why is this happening and how can we resolve it? Yegna has made me realise that I should see things differently,” says Rahel Getu (Lemlem).

Before recording started, every member of the band went on a ‘girl-led journey’, spending two days with young women whose lives are similar to those of the characters they play. This experience has had a profound effect upon them.

“The girl-led journey made me realise how difficult life is for many people, including Emuye’s life with the abusive father. There are so many girls out there like the one I met,” says Zebiba. “The drama helped me to see life differently.”

Eyerusalem Kelemwork (Sara) agrees: “I’ve performed before and what makes Yegna different is that I have seen girls who have similar lives to our characters and so the issues are in my heart – they are our issues and Yegna means ‘ours’. It’s more than a job for me. Understanding their lives and feeling what they are feeling is the most important thing.”

Whether this change in attitude can be translated to the wider Ethiopian public remains to be seen. This uncertainly has helped fuel recent attacks on Yegna by the right-wing press in the UK, which balk at the idea of British tax payers paying millions of pounds to fund the ‘Ethiopian Spice Girls’.

The comparisons with the British girl-band the Spice Girls, which achieved global success and notoriety in the 1990s, while inevitable are wrong.

Yes, both groups were deliberately manufactured. And yes, both consist of five strong young women each with identifiable characters. But Posh, Baby, Sporty, Scary and Ginger never intentionally set out to promote grrrl power (girl power), even if that was a side-effect of their irreverent attitude.

A more accurate comparison would be with US teen idols The Monkees, whose TV show and records were popular in the late 1960s. But even this doesn’t stand up to scrutiny.

Yegna, unlike their US and UK analogues, are not in it for the money or the fame. “Our objective to is change the perception of the people towards abuse and what we have learned will stay with us, even if the project is not here,” insists Lemlem Haile Michael, who plays Mimi.

“It’s not the fact that I’m on TV. It’s the cause. It’s a great thing to be part of,” Eyerusalem adds.

Before the interview concludes the girls sing a cappella of one of the tracks from the show. The purity of their voices and the accuracy of their harmonies clearly show that they have talent.

But what is much more striking is that they perform as one – their choice of song, Andinetachin (‘togetherness’), is truly apt.

“The job requires you to support each other. It’s difficult to work on such projects unless you get along. Luckily we are good friends,” explains Teref Kassahun Tsegaye (Melat).

“We love each other. We support each other. We talk about our problems and try to find solutions in our group. We all have different qualities, we come from different backgrounds and we learn from each other,” Rahel concurs.

In their friendships both on and off air Yenga set a fine example for girls across Ethiopia to follow.

For more, visit The AfrianReport