Few can afford to purchase an apartment, say organizers; several injured in clashes with police. 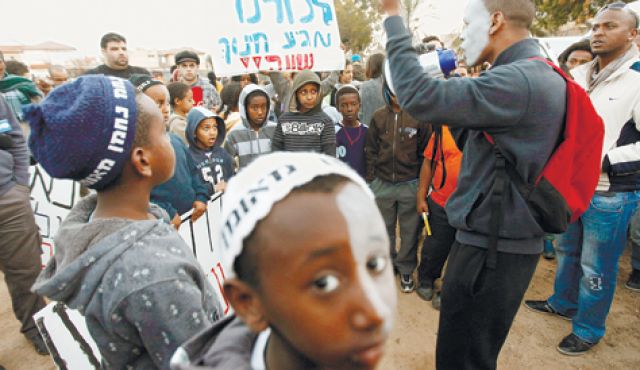 Hundreds of immigrants from Ethiopia demonstrated in Jerusalem on Tuesday against their poor housing conditions and the impossibility of purchasing an apartment. Nine protesters were arrested and several were injured in clashes with the police.

“More than 2,000 people are living in overcrowded conditions in immigrant absorption centers, some of them for more than a decade,” one of the demonstration organizers said.

The demonstrators, who gathered near the Knesset, blocked Kaplan Road for a few hours and Derech Yitzhak Rabin for a short time. They also protested against soaring housing prices, which made it impossible for them to buy an apartment. Due to the high prices, the state’s assistance to purchase housing was irrelevant, organizers said.

“Nobody gives us an official answer, nobody sees us,” one of the organizers, Spino Rata, said.

The State Comptroller’s Report published in May, which examined the state’s part in absorbing and integrating immigrants from Ethiopia, said the government had issued plans without budgeting for them and allocated duplicate funding for others. The report found lack of coordination among the ministries regarding the immigrants.

More than half − 51.7% − of families from Ethiopia and 65% of the children subsist below the poverty line, the report said. The government had arranged convenient mortgage terms for young families from Ethiopia, but over a period of four years only two families could afford to take out a mortgage, due to the high housing prices and interest rates. Although the officials in charge were aware of the situation, they did not change the terms, the comptroller found.

Also, in certain projects such as programs to prevent imprisoning soldiers, only part of the funds allocated had been used, the comptroller found.