Cuba:”the best and most genuine friend of Ethiopia and Africa” Dr. Tewodros Adhanom 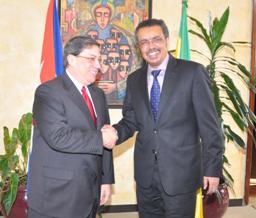 According to the report, Dr. Tewodros praised Cuba as “the best and most genuine friend of Ethiopia and Africa.”Recounting Africa Union’s opposition to embargo on Cuba, Adhanom is said to have affirmed that it would continue support for the end of sanction against Cuba. The report did not elaborate if Dr. Tewodros Adhanom is reiterating African Union’s position to continue support but it does sound as if he is speaking on behalf of African Union. As well, the report indicated that Dr. Tewodros called for Cuba to be economically active in Ethiopia beyond health and agricultural sectors.