Fighting breaks out for first time in nearly six months near eastern city, just days before visit by UN chief. 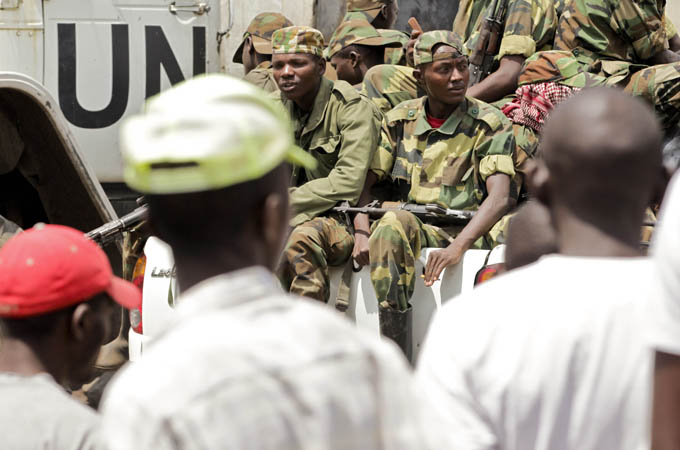 May 20,2013 (Aljazeera) Congolese soldiers have clashed with rebel fighters for the first time in nearly six months near the city of Goma, just days before Ban Ki-moon, UN secretary-general, is due to visit the eastern city.

“The fighting has been with heavy weapons. It’s still continuing although it is less intense … We’re sending reinforcements. We must protect the town of Goma at all costs,” Colonel Olivier Hamuli said.

There was no confirmation on casualty figures from the clashes, which came a week after the first troops from a new UN intervention brigade arrived in the country with a strong mandate to attack rebel groups.

The M23 seized and briefly held Goma, largest city in eastern DRC last November despite the presence of thousands of UN soldiers.

A rebel spokesman Amani Kabasha said that the M23 had initially driven off an attack by the Rwandan Hutu rebels of the Democratic Forces for the Liberation of Rwanda (FDLR), before coming under attack from government artillery.

“We are not responding to their shelling, but what we’re hearing is not good, that (Congolese president Joseph) Kabila is sending reinforcements. He needs to calm down,” Kabasha said.

Major Vincent Tourny, an interim spokesman for MONUSCO, the UN peacekeeping mission in the DRC, said that the Mutaho region was attacked in the early morning by the M23 rebels targeting the Congolese army.

Government troops were driven back, but managed to recover their positions, and by 10:00am local time, shooting became “intermittent” in the area, Tourny said, adding that “800 civilians have fled towards Goma”.

Ban is due to arrive in Goma this week as part of a visit with the president of the World Bank, aiming to draw attention to the conflict in the country, where millions have died during nearly two decades of violence.