Semayawi Party called for a peaceful demonstration in Addis Ababa

Semayawi Party to stage a peaceful demonstration in the capital, Addis Ababa

Semyawi party, one of the opposition parties in Ethiopia, called for a peaceful demonstration which is to be held in Addis Ababa between May 23 and 25, 2013. The demonstration is apparently planned in a way to coincide with golden jubilee of what was once Organization of African Union, now African Unity.

Purpose of the demonstration is to push for peaceful demands, apparently mainly of reform nature, which was, according to Semayawi party official statement, ignored by the ruling party.

Incarceration of journalist and opposition party members on tramped-up charges of “terrorism” which the ruling party seemingly perceives as a political innovation to silence critical and dissenting voices in the country through “legal means,” forced eviction of citizens from their settlements and gross human rights violations involved in the process, incarceration of Ethiopian Muslims who opposed government intervention in the affairs of Ethiopian Muslims, skyrocketing cost of living and rising unemployment are some of the main issues which Semayawi party claimed to have demanded from government to which government was irresponsive due to its dictatorial nature. Given the attitude of the ruling party towards peaceful demonstrations, many doubt whether the ruling party will allow the peaceful demonstration to take place.

Article 30 of the constitution clearly stipulates that “Everyone [apparently extended to non-citizens too] has the right to assemble and to demonstrate together with others peacefully and unarmed and to petition. Appropriate regulations may be made in the interest of the public convenience relating to the location of open-air meetings and the route of the movement of demonstrators or for the protection of democratic rights, public morality, and peace during such a meeting or demonstration.”  Article 8 (s2) of the constitution upholds the view that the constitution is “an expression of their [people’s] sovereignty” and in fact the following article ( 9) boldly declares that the constitution is the supreme law of the land.

That is the constitution. Experiences of citizens and governance practices of TPLF led government tells , entirely, a different story.

Since then, government acted as if “there is no such thing as constitutional right to demonstrate peacefully” and blocked every single possible ways supposedly essential to freedom of expression and assembly. “Anti-terrorist legislation” itself is principally introduced to foster repression.

Certainly, Semayawi party’s call for a peaceful demonstration is a significant move in that it could break the dreadful silence befell on citizens after the 2005 election and could inspire citizens to assert constitutional rights and freedoms. On top of that most of issues the party raised are crucially important to Ethiopians in the opposition camp and outside of it alike which means that the demands are more or less unifying.

Semayawi party also called upon opposition parties and civic organization to take part  in the peaceful demonstration.  Please check the next page to see the statement Semayawi party issued in Amharic 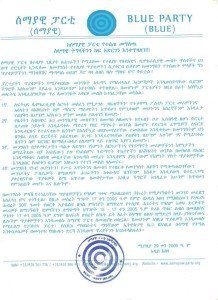