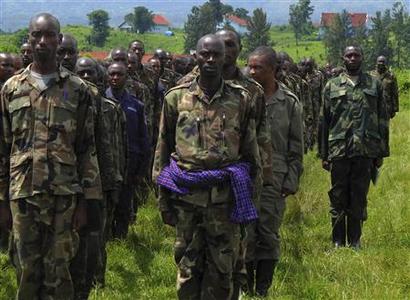 May 6,2013 (Reuters) – In forested hills in eastern Congo, rebels are honing their ambush skills to prepare to face a new United Nations force which has a mandate to go on the offensive.

“Destroy the enemy. Cause fear and stop his patrols,” a rebel officer wrote on a blackboard as he instructed uniformed M23 fighters at a camp seized from the government in Democratic Republic of Congo’s eastern borderlands.

In the latest effort to bring peace to a region riven for years by conflict over ethnic rivalry and mineral riches, the United Nations is deploying a 3,000-strong brigade of African troops with a mission of neutralizing armed groups such as M23.

Approved by the Security Council in March for “targeted offensive operations”, the brigade from South Africa, Tanzania and Malawi is the first to be created within a traditional peacekeeping force. A 17,000-strong existing U.N. force, MONUSCO, has struggled to maintain security in eastern Congo.

If the M23 rebels, who emerged last year from a Tutsi-led rebellion in 2004-2009, fear the new U.N. Force Intervention Brigade, they are not showing it.

They routed U.N.-backed Congolese troops and briefly seized the North Kivu provincial capital of Goma in November, an embarrassment for President Joseph Kabila and the United Nations.

M23 spokesman Colonel Vianney Kazarama said the rebel group, which is demanding political concessions from Kabila’s government, had no plans to attack U.N. peacekeepers. But if targeted, it would respond.

“You’ll see, we’re going to capture them, destroy their equipment, march over their forces,” Kazarama said.

At the captured government camp, rebels paraded and put on a show of hand-to-hand combat in the bush grass.

Military experts say the brigade could find itself severely stretched in its mission to neutralize and disarm the M23 and other armed groups.

M23 is well-trained and well-armed. U.N. experts say it is backed by Rwanda and Uganda although both countries deny it.

FDLR rebels, the remnants of Hutu killers who carried out the 1994 genocide of Tutsis in Rwanda, and other militias also roam the green hills and valleys of North Kivu.

“It’s a complex mission. From a tactical point of view this is a logistical nightmare because you don’t know who’s who in the zoo from one day to the next,” said Helmoed Romer Heitman, a South African military analyst.

He questioned whether the U.N. brigade, which will include about 1,000 South African troops and an equal number from Tanzania and Malawi, would big and strong enough.

“The overall U.N. mission is not properly conceived. I think the force is too small and there is a certain amount of wishful thinking,” Heitman told Reuters in Pretoria.