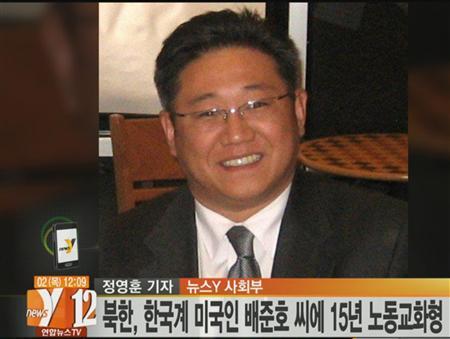 May 2,2013 (Reuters) – North Korea sentenced an American citizen to 15 years of hard labor on Thursday for crimes against the state, prompting a U.S. call for his amnesty in hopes of avoiding him becoming a bargaining chip between the two countries.

Kenneth Bae, 44, was born in South Korea but is a naturalized U.S. citizen and studied psychology for two years at the University of Oregon. His sentencing comes after two months of saber-rattling that saw North Korea threaten the United States and South Korea with nuclear war.

Pyongyang has previously tried to use American prisoners as negotiation assets in talks with Washington. A U.S. official, who spoke on condition of anonymity, said Washington was not currently looking for an envoy to try to secure Bae’s release as it has sometimes done.

The official said the United States has sought in recent years to break out of a pattern of having to resolve repeated crises with North Korea through transactional deals.

Bae will likely serve his sentence in a special facility for foreigners, not in one of the repressive state’s forced labor camps. Human rights groups say more than 200,000 people are incarcerated in these camps, where they are beaten and starved, sometimes to death.

Human rights activists in South Korea say Bae may have been arrested for taking pictures of starving children.

“He has feelings for orphans and has done some ministry work feeding orphans,” added Ross, who said he has been a casual acquaintance of Bae since they met four years ago through church affiliations in Hawaii. “He has a missionary heart,” Ross said.

Bae’s sentencing brought bad back memories for Euna Lee, one of two U.S. journalists sentenced to 12 years in 2009 and released only after a visit to Pyongyang by former President Bill Clinton. She cried out loud in the courtroom when her labor camp sentence was handed down.

“The word ‘labor camp’ took the tiny hope I had away from me. I was physically and mentally weak and I really thought I would not make it home,” South Korea-born Lee said via email.

Bae was part of a group of five tourists who visited the northeastern North Korean city of Rajin in November and has been held since then. According to U.S. media, Bae most recently lived in the Seattle area.

The State Department recommends that U.S. citizens avoid travel to North Korea, although it does not block trips.

“U.S. citizens crossing into North Korea, even accidentally, have been subject to arbitrary arrest and long-term detention,” reads the department’s travel warning, updated in March.