Regassa and Jelagat triumph in Rotterdam 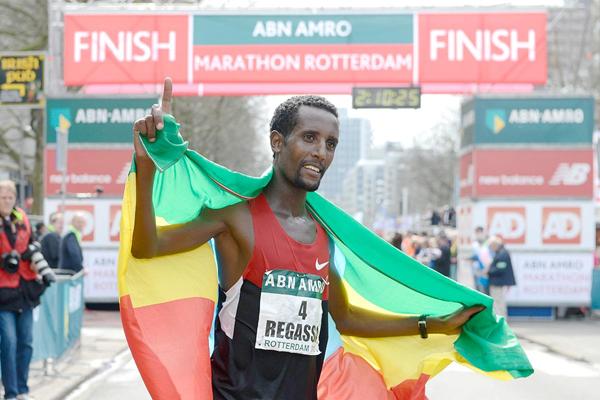 April 14,2013 (IAAF) It speaks volumes of the quality of a race when a 2:05:38 clocking can be classed as “disappointing”. Without taking anything away from Tilahun Regassa’s victory in today’s (14) ABN AMRO Marathon Rotterdam, an IAAF Gold Label Road Race, the organisers were hopeful that the 2:04:27 course record would be broken.

Expectations were a bit more conservative for the women’s race, so Jemima Jelagat’s winning time of 2:23:27 – crushing her PB by more than six minutes – came as a pleasant surprise. But regardless of what was expected before either races, Regassa’s run was the performance of the day.

Regassa lives up to sub-2:06 credentials

Organisers had assembled an elite men’s field that included six athletes with sub-2:06 PBs, but on a day where a warm spell of weather and a head wind in the closing stages posed something of a challenge, Tilahun Regassa was the only athlete to dip under that barrier.

As promised in the pre-race press conference, the lead group cooperated well with each other, and they passed through 5km (14:53) and 10km (29:23) in a pace that indicated a finishing time of 2:04.

The 13 athletes in the lead group, which include five pace-makers, passed 20km in 58:49 and reached the half-way mark in 62:05, as planned. The last two pace makers, Kenyan duo Richard Sigei and Ezekiel Chebii, brought their compatriots Sammy Kitwara, Geoffrey Kipsang, Joel Kimurer, John Nzau Mwangangi, Wilson Chebet and the Ethiopians Tilahun Regassa and pre-race favourite Getu Feleke through 30km in 1:28:20.

The leading group then broke up as just six athletes entered the Kralingse Bos (Kralingen wood), a declining part of the course. At roughly 32km, Regassa pushed the pace and opened up some metres on his opponents, as Feleke, Mwangangi and Kitwara tried to follow.

The wind and the increasing temperature then took their toll. The pace decreased but Regassa kept his leading position. He passed 40km in 1:58:44 – nearly half a minute ahead of Feleke. He crossed the finish line in 2:05:38 – just 11 seconds shy of the PB he set when finishing third in Chicago last year, his only other Marathon to date.

It was the slowest winning time in Rotterdam since 2009 – again, another testament to the speedy Dutch race – while the course record of 2:04:27, set by Duncan Kibet and James Kwambai in a thrilling two-man finish in 2009, lives to see another day.

Regassa said afterwards that he was very happy with the victory. “It was a difficult race as the weather changed so fast,” he said. Getu Feleke, who finished as runner-up for the second year in a row, dropped more than a minute behind his countryman in the final kilometres, clocking 2:06:45. Third place went to Sammy Kitwara (2:07:22) as only the top three men broke 2:09.

Disappointment for Kibet, delight for Jelagat

For Dutchwoman Hilda Kibet, the Marathon was a disappointment. The former European cross-country champion was the pre-race favourite, but finished third in a disappointing 2:26:42.

She was level with Kenya’s Jemima Jelagat at half way as they both recorded a 72:12 split – under PB pace for both athletes. But Jelagat, who finished second in Boston last year, then injected a 16:42 split between 20km and 25km to open up a gap of a few seconds on the home favourite. [continued on page 2]