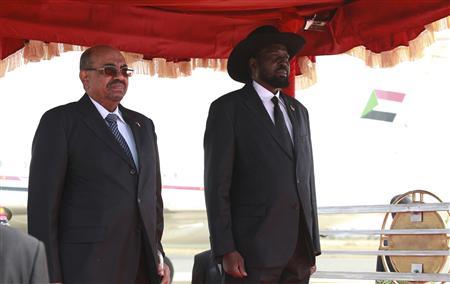 By Khalid Abdelaziz and Andrew Green

April 12,2013 (Reuters) – Sudanese President Omar Hassan al-Bashir said on Friday he wanted peace and normal relations with South Sudan in his first visit there since it split off from his country in 2011 after decades of civil war.

The neighbors agreed in March to resume pumping oil through pipelines from south to north and ease the tensions which had threatened to reignite the war between them that had killed more than two million people.

Diplomats hope Bashir’s visit will help the two sides overcome deep mistrust and solve their remaining disputes over the ownership of Abyei and other contested border regions.

Bashir, who canceled a visit to Juba a year ago when border fighting almost flared into full-scale war, said in a speech in the southern capital that he had ordered Sudan’s borders with South Sudan to be opened for traffic.

“I have instructed Sudan’s authorities and civil society to open up to their brothers in the Republic of South Sudan,” Bashir said, alongside South Sudan’s President Salva Kiir.

Kiir said he had agreed with Bashir to continue talks to solve all conflicts over disputed regions along their volatile 2,000 km (1,200 mile) frontier.

“Some issues need more discussions,” Kiir said, adding that he had accepted an invitation from Bashir, who was walking on his trademark walking stick, to visit Sudan soon, his second trip since the secession.

Neither leader offered a solution for Abyei, a border region that contains fertile land, some oil and is highly symbolic.

After their meeting in the presidential palace, Bashir swapped his business suit and tie for a traditional white robe to join Friday prayers in the “Kuwaiti” mosque in central Juba.

“I came to Juba because we now have the biggest chance to make peace,” he told 400 Muslim worshippers from South Sudan and the Sudanese expatriate community.

“We won’t go back to war. President Kiir and I agreed that the war was too long,” said Bashir, who last visited Juba to attend South Sudan’s independence ceremony on July 9, 2011.

At a press conference, local journalists challenged Bashir for referring to the South’s ruling party, the Sudan People’s Liberation Movement (SPLM), as “insects” when emotions ran high on both sides during last year’s border fighting.

“I didn’t call the people of South Sudan insects…I cannot do this because I ruled them for 20 years,” Bashir said, adding that he had only been making a play on the SPLM’s Arabic name.

He said Sudan had been hurt when South Sudan’s army in April of last year briefly seized the Heglig oilfield, which is vital to Sudan’s economy. “There was no justification for this,” he said.