Tadese breaks course record in Paris as Some smashes PB 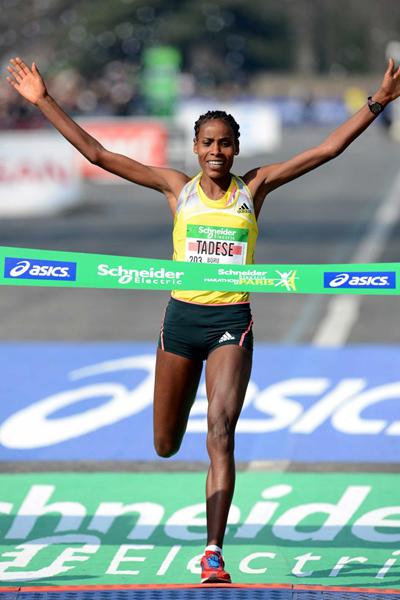 April 7,2013 (IAAF)Ethiopia’s Boru Feyse Tadese set a world-leading time and women’s course record of 2:21:05 today (7) at the 37th edition of the Schneider Electric Marathon de Paris, an IAAF Gold Label Road Race, while Kenyan Peter Some was the surprising winner of the men’s race in 2:05:38.

With cool temperatures and sunny sky, the weather conditions were ideal for the start of the Paris Marathon at 8:30. The women’s race started very fast, as the leaders ran 16:44 at 5km, faster than the 17:01 by Ethiopian Tirfi Beyene ran when she broke the Paris Marathon course record last year (2:21:37).

After one hour, pre-race favourite Eunice Kirwa Jepkirui of Kenya – the fastest of the field with a 2:21:41 personal best – led from Ethiopians Merima Mohammed, winner in Houston this year with 2:23:37, Amane Gobena, winner in Seoul and Osaka in 2010, and Marathon debutante Imana Gutemi.

But it was another Ethiopian, World Half-marathon silver medallist Boru Feyse Tadese, who then moved into the lead and went through the half-way mark in 1:10:08 – the fastest ever intermediate time in Paris.

The 25-year-old ran very steadily and progressively built up her winning margin, disposing of Jepkirui and Mohammed before the Bois de Boulogne. Her final time, 2:21:05, was easily a world-leading time, and a Paris Marathon course record. After her 68:35 at the RAK Half Marathon in February, this was another PB for Tadese who improved her previous best by more than two minutes.

She now moves to 25th on the world all-time list, one place ahead of Ingrid Kristiansen’s former long-standing World record (2:21:06).

Team-mate Mohammed held on for second place in 2:23:14, 20 seconds ahead of Jepkirui.

Some surprises with big PB

As the compact pack in the men’s race passed the Hotel de Ville, the first 5km was covered in 14:44, twelve seconds faster than the time achieved by the Kenyan Stanley Biwott when he set the course record (2:05:11) last year.

The three pacemakers maintained the pace towards the East side of the French capital, passing through 10km in 29:31. They were leading about 15 athletes which included all the favourites –Ethiopians Tadese Tola, the fastest entrant with 2:04:49; Abraham Girma, a 2:06:48 performer; Sahle Warga, 2:08:38 this season; and Kenyans Eric Ndiema, fourth in Paris last year; Sylvester Teimet, seventh at the Paris Half Marathon last month; and Philip Sanga, 2:06:07 in 2011.

In the Bois de Vincennes, Sanga was timed in 44:28 for 15km, while Tola was hidden inside the group. No changes occurred until the half-way mark, where the leading dozen were still led by two pacemakers and the split time (1:02:25) was now outside course record pace (1:01:51).

The runners were by themselves as they faced the difficulty of two consecutive up-hill sections with 14km to go, close to Pont de l’Alma.  The group – led by the Kenyan trio of Some, Sanga and Ndiema – reached 25km in 1:14:19 and 30km in 1:29:35, running at a pace still well over 20km/h, while favourite Tola was still biding his time.

Suddenly, Some injected an acceleration of pace which went unanswered. Occasionally looking over his shoulder to check his opposition, he steadily opened a large gap as he headed towards the Bois de Boulogne.

“When I chose to accelerate, nobody followed me so I maintained the pace,” explained the 22-year- old winner. There was a sprint for the second place between Tola and Ndiema, and the Ethiopian had the edge as he beat the Kenyan by one second, crossing the finish line in 2:06:33.

Pierre-Jean Vazel for the IAAF