Cited from the Washington Times 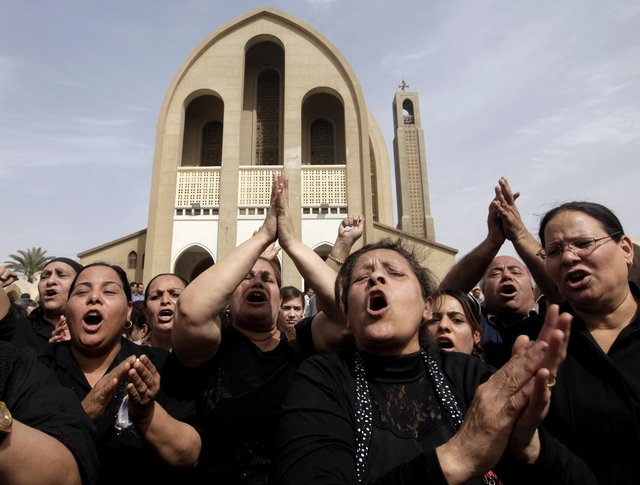 April 7,2013 (Aljazeera) Mohamed Morsi, the Egyptian president, has condemned deadly clashes at the Cairo headquarters of the Coptic Christian pope as “an attack against myself”, ordering a quick probe into the violence, a statement said.

“I consider any attack on the cathedral an attack against myself,” Morsi said on Sunday in a statement published by the official MENA news agency.

The probe follows clashes after a funeral for Copts slain in sectarian violence.

At least one person was reported killed and MENA said 17 people had been injured in fighting in Sunday’s violence.

In some of the worst sectarian violence for months on Friday, four Christians and one Muslim were killed in El Khusus,
north of Cairo, when members of both communities started shooting at each other.

New clashes erupted on Sunday when hundreds of angry Copts who had attended a funeral service at St Mark’s Cathedral spilled out into the streets of Cairo, chanting “With our blood and soul we will sacrifice ourselves for the cross.”

After an emotional church service, where relatives of the dead wept, young Christians started hurling rocks at police officers, a witness said.

The protesters smashed six private cars and set two on fire, prompting an angry reaction from Muslims living in the neighbourhood, who threw stones at them, a witness said

Christian-Muslim confrontations have increased in Muslim-majority Egypt since the overthrow of Hosni Mubarak in 2011 gave freer rein to hardline Islamists repressed under his rule.

Al Jazeera’s Rawya Rageh, reporting from Cairo, said that the situation “remained tense” outside the cathedral, with gunshots still being heard in the area as of late Sunday afternoon.

“From the beginning, the mood during the funeral marches was one of clear anger. The Christian community have been complaining for two years now, since the revolution, of increased physical attacks against them,” said Rageh.

“Their concern is now that Islamic groups have been empowered and have been acting more freely after the revolution, that little is being done to address the long-standing roots of sectarian tension.”

President Mohamed Morsi, a Muslim Brotherhood leader elected in June, has promised to protect the rights of Copts, who make up about 10 percent of Egypt’s 84 million people.

Egypt’s Coptic Church issued a statement on Sunday night calling for calm and expressing sorrow for the clashes.

Christians have complained of attacks on churches by radical Islamists, incidents that have sharpened long-standing Christian grievances about being sidelined in the workplace and in law.

The president’s office and top Muslim leaders were quick to condemn Friday’s clashes, which happened after Christian children scrawled on the wall of a Muslim religious institute, according to witnesses.

Still, many Christians at the funeral called for Morsi and his Islamist allies to go, some of them chanting “The blood of
Christians is not cheap, Morsi, you villain.”

Borkena– In view of neoliberals’s strong interest in secularism probably due to undeclared perception that it weakens the collective power of society and collective moral ground, and in view of increasing attacks on religion through arts, literature and  comedy, followers of different religious tradition need to take caution before getting into sectarian violence on grounds of religion.

Recently, Muslims in Myanmar and Srilanka, where they are presumably minorities, experienced brutal persecutions in the hands of Buddhists. And today we hear news of persecution of Egyptian Copts in the hands of Egyptian Muslims.  This is very sad story and very wrong, to say the least. Before taking impulsive and violent actions, it would have been wise to investigate the alleged wall graffiti. Does it make sense to think that Egyptian Copts, knowing that such an act would trigger violence and affect them more negatively, would do the wall graffiti? If it is a work of an angry and impulsive youngster, should the Coptic community pay for that? And what if it was the work of other parties with interest in secularism? What happened is not in the interest of neither Egyptian Christians nor Egyptian Muslims. Political opposition aside, I cannot tell whether Mohammed Morsi meant it or not. But how he described the attack:    “an attack against myself” (Aljazeera) is a sane political statement and he should take instances like these very seriously and work on tracing the roots of problems like these.  Sectarian violence like these ones would not benefit either Egyptian Muslims or Egyptian Christians at the end of the day. They do help other entities.