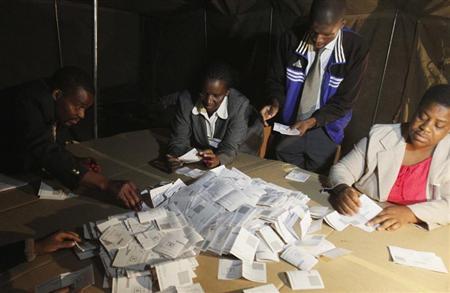 March 19, 2013  (Reuters) – Zimbabweans have approved a new constitution that curbs presidential powers after 33 years of Robert Mugabe’s rule and puts the southern African state a step closer to a vote, the election commission said on Tuesday.

Nearly 95 percent of voters in a referendum approved the new charter, which was backed by Mugabe and Prime Minister Morgan Tsvangirai, political rivals who were forced into a power-sharing deal after disputed elections in 2008.

The turnout, at slightly more than half the 6 million eligible voters, was higher than many had expected. Analysts said the presidential and parliamentary election expected in the second half of the year could draw out even more voters in what will be seen as a showdown between Mugabe and Tsvangirai.

A high turnout in the rural areas that have traditionally supported Mugabe’s ZANU-PF party suggests the vote is headed for a tense rural-versus-urban split if Tsvangirai’s Movement for Democratic Change (MDC) mobilizes supporters in high numbers.

The new charter sets a maximum of two five-year terms for the president. However, the limit will not apply retroactively, so Mugabe, 89, and in power since independence from Britain in 1980, could still theoretically rule for the next decade.

Presidential decrees will also require majority backing in the cabinet, and declaring emergency rule or dissolving parliament will need the approval of two-thirds of lawmakers, changes that will take effect after the next election.

The new constitution and referendum were conditions of the 2008 power-sharing deal.

The turnout of more than 3 million people was the largest since 1985. Even bigger numbers are expected in the presidential and parliamentary elections, in which Mugabe will face a new crop of voters born since 1980.

“On the face of it, I think this referendum confirms that we are going to have a very tight electoral race,” said Eldred Masunungure, professor of political science at Harare’s University of Zimbabwe.

“People in urban areas were cynical and didn’t put much value in the constitution, but the general election will be a different game altogether.”

Although the referendum passed off without incident, Mugabe detractors are seizing on the arrest at the weekend of four MDC staff members and leading human rights lawyer Beatrice Mtetwa as evidence that ZANU-PF is bent on intimidating rivals ahead of the elections.

Mtetwa appeared before a magistrate court Tuesday and was charged with obstructing police work. She was to spend a night in prison, together with the MDC officials, and their bail hearing will continue on Wednesday.

Thabani Mpofu, Mtetwa’s attorney, said her arrest amounted to an assault on Zimbabwe’s legal profession at a time when the country was celebrating a new constitution.

Tsvangirai told journalists he hoped the adoption of a new constitution would usher in respect for the rule of law, and urged his MDC ranks to stand up to any intimidation.

“We must remain steadfast and focused despite these attempts to divert our attention from our democratic agenda,” he said. “Change is certain and inevitable.”

Despite his age and fears that his health is failing, Mugabe has said ZANU-PF would fight like a “wounded beast” to retain power after being forced into a compromise unity government after the contested 2008 election outcome.

That vote took place amid a severe economic crisis, with hyperinflation of more than 500 billion percent and food shortages, many of which were blamed on Mugabe’s policies.

The crisis has eased under the power-sharing government, but the recovery is fragile and the MDC says Zimbabwe will not realize its full potential if ZANU-PF retains power.

Mugabe, a devout Catholic, is in Rome for the inauguration of the new Pope and has not commented on the referendum result.