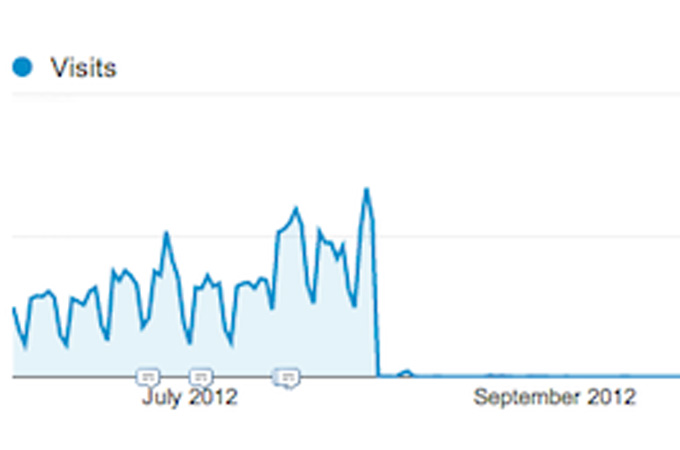 Al Jazeera’s English and Arabic websites are reported to have been blocked in Ethiopia, raising fresh fears that the government is continuing its efforts to silence the media.

Though the authorities in Addis Ababa have refused to comment on the reported censorship, Google Analytics data accessed by Al Jazeera shows that traffic from Ethiopia to the English website had plummeted from 50,000 hits in July 2012 to just 114 in September.

Traffic data revealed a similar drop for the Arabic website, with visits to the site dropping to 2 in September from 5,371 in July.

A blogger, who cannot be identified for his own safety, said Ethiopian censors had been targeting Al Jazeera since the Qatar-based network began airing coverage of ongoing protests against the way in which spiritual leaders are elected in the Horn of African nation.

Attempts by Al Jazeera to get an official response from authorities failed.

Ethiopia is ranked 137 out of 179 surveyed nations on the latest Press Freedom Index of Reporters Without Borders (RSF), an international advocacy group for press rights.

Both RSF and the Committee to Protect Journalists (CPJ) have tied Ethiopia’s deteriorating media environment, in part, to a 2009 anti-terrorism law that has been used to jail 11 journalists since its ratification.

“The usage and practice of this law is illegal. It has a clause that makes whoever writes about so-called terrorist groups, which are mostly normal opposition groups, a terrorist,” CPJ’s East Africa Consultant Thom Rhodes told Al Jazeera.

“Now it’s got to the point that the law is being used to label those in the Muslim community conducting peaceful protests to defend their right to choose their spiritual leaders as terrorists. It’s a sad state of affairs.”

CPJ says Ethiopia is the second-highest jailer of journalists in Africa after neighbouring Eritrea, were seven journalists are currently detained.

Both the RSF and CPJ have expressed concern over reports that the country has begun using much more sophisticated online censorship systems over the last year, including ones that can identify specific internet protocols and block them.

__
Join the conversation. Like borkena on Facebook and get Ethiopian News updates regularly. As well, you may get Ethiopia News by following us on twitter @zborkena