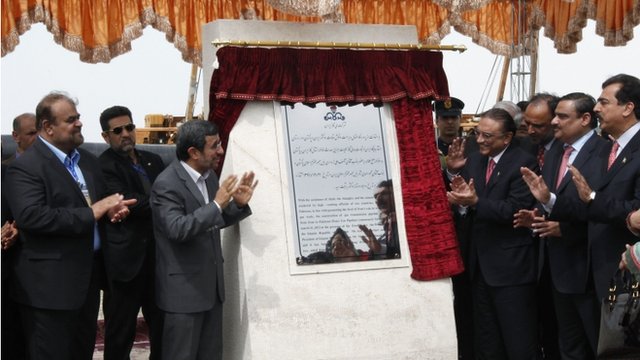 The US has warned that the project could incur sanctions connected with Iran’s nuclear programme.

The long-delayed pipeline is seen in Pakistan as a way of alleviating the country’s chronic energy shortages.

The work on the Iranian side is almost complete. Construction in Pakistan will begin on Monday.

Live television footage showed the two presidents shaking hands with dignitaries as the ceremony got under way at the border.

“There are people who are against the progress of Iran, Pakistan and other countries. They have found an excuse – called the nuclear issue – to exert pressure on Iran and to prevent its progress,” President Ahmadinejad said.

“I want to tell them the gas pipeline has nothing to do with nuclear energy; you can’t make an atomic bomb with natural gas.”

President Zardari said the project was very important for Pakistan and was not “directed against any other country”.

A total of 780km (485 miles) of pipeline is due to be built in the country over the next two years.

Dubbed the “peace pipeline”, talks on the project began in 1994. The pipeline was initially intended to carry gas on to India, but Delhi withdrew from negotiations in 2009, just a year after it signed a nuclear deal with the US.

The US says the project would enable Iran to sell more of its gas, undermining efforts to step up pressure over Tehran’s nuclear activities.

“If this deal is finalised for a proposed Iran-Pakistan pipeline, it would raise serious concerns under our Iran Sanctions Act. We’ve made that absolutely clear to our Pakistani counterparts,” State Department spokesperson Victoria Nuland told reporters last week.

Washington – a major donor to Pakistan – has also argued that there are other ways to ease Pakistan’s energy crisis. One option favoured by the US is a plan to import gas from Turkmenistan through Afghanistan, which has been under discussion for years.

But power shortages have become a major and pressing issue in Pakistan, and the government there insists it will not bow to pressure.