Cardinals seek prayers ahead of conclave

( CBC citing AP) Cardinals took a break from maneuvering ahead of this week’s papal conclave to fan out across Rome and celebrate Sunday Mass at local parishes.

The worship services provided a chance to see the cardinals up close and hear them preach two days before they enter the conclave. Roman Catholics and others packed the churches, holding up cell phones to take photos and video.

The cardinals said Mass in their titular churches, the parishes that according to church tradition are assigned to them as clergy of Rome, creating a symbolic bond with the pope. The conclave, with 115 cardinal-electors, is scheduled to start Tuesday.

The cardinals have been holding meetings and informal gatherings ahead of electing a successor to Benedict XVI. Several church leaders acknowledged the historic moment at Mass.

“This Sunday is also special because today we prepare for the conclave,” said Boston Cardinal Sean O’Malley, in his sermon at Holy Mary of Victory church. “Let us pray that the Holy Spirit illumines the church to choose a new pope who will confirm us in our faith and make more visible the love of the good shepherd.”

The parish priest who introduced the cardinal was more direct, describing O’Malley as “humble, but decisive,” and saying he hoped his next visit to the church would be as pontiff. The leading Italian newspaper, Corriere della Sera, has cited the Boston archbishop as a favorite, despite past resistance to the idea of a superpower pope.

Cardinal Angelo Scola of Milan, considered a top papal contender, distributed communion at Church of the Twelve Holy Apostles, and spoke on the mission of the church.

“It is to announce over and over again, even to the modern man who is so sophisticated but sometimes lost in the new millennium, to announce always and repeatedly that the Lord’s mercy is a source of hope even in these difficult times,” he said. Scola waved to well-wishers as he was driven away from the church.

Cardinal Marc Ouellet from Quebec celebrated Mass at the Santa Maria in Transpontina church in Rome. Ouellet has been touted as a leading contender as well. In his hometown of La Motte, 600 kilometres northwest of Montreal, his family has expresed their reluctance for their brother to ascend to the position.

“We’re quite frank about it as a family — we would prefer to have a brother.” his younger brother, Roch, said Sunday

It’s been decades since the cardinal has lived in the town but he has made regular visits to the area, usually twice a year, to see his siblings and their 90-year-old mother, Graziella.

The 68-year-old cardinal, third-eldest in a family of six boys and two girls, now holds one of the most powerful jobs in the Roman Catholic Church. He’s in charge of the international process to name bishops and consults regularly the pope.

‘A difficult time but also a joyful one’

Meanwhile, another contender was at Church of St. Andrew at the Quirinal. A crowd greeted Brazilian Cardinal Odilo Pedro Scherer, considered Brazil’s best hope of filling the papacy. Scherer, who lived in Rome as a young priest, shook hands and hugged the faithful before celebrating Mass. He asked for prayers for the church, calling this period “certainly a difficult time, but also a joyful one and full of hope.” 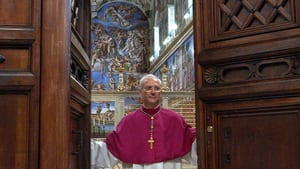 Scherer joined Twitter in 2011 and in his second tweet said: “If Jesus preached the gospel today, he would also use print media, radio, TV, the Internet and Twitter. Give Him a chance!”

Cardinal Peter Erdo, the archbishop of Esztergom-Budapest, said Mass at Basilica of Santa Balbina on the Aventine hill, where the first known Hungarian cardinal, Istvan Vancsa, was buried in the 13th century.

Erdo, a canon lawyer and theologian, is considered a possible compromise candidate. He would be the second pontiff to come from eastern Europe, following Pope John Paul II.

“Let us all pray for the Conclave that will gather the day after tomorrow,” Erdo said. “Let’s call the Holy Spirit to descend upon the Holy Church.”