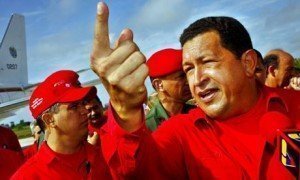 Vice-president Nicolas Maduro made the announcement on public television shortly after, speaking from the Military Hospital in Caracas, where Chavez was being treated.

Military and Bolivarian police patrols have been sent out into the street to protect the people and maintain the peace.  For now, things are calm here, with some people celebrating by honking their car horns, and many others quietly mourning in their homes. Around the country mourners are also gathering in the main plazas to rally, and in some cases, to pray.

Maduro made the announcement just a few hours after addressing the nation for an hour, accusing the opposition of taking advantage of the current situation to cause destabilisation.

“Those who die for life, can’t be called dead,” Maduro concluded.

Chavez supporters are also gathering in main squares across the country to rally together and mourn the death of their president.

Describing the scene in Caracas, Andromaco Martinez stated that he was on the metro when he found out about the president’s death, “people began running everywhere”.

In Plaza Bolivar, “no-one is crying or praying,” he said, emphasising that the Venezuelan people would defiantly defend the revolution.

“The struggle has already been ignited,” he added.

In Merida state, people gathered in their local plazas. In the Plaza Bolivar, hundreds rallied, despite the dark and phone services not working well, with most people hugging and crying.

Security measures are being put in place around the country, and government officials have urged the people to remain peaceful and not believe the rumours of ransacking.

The government has declared 7 days of mourning, and schools will be closed until Monday. There will be an official ceremony for Chavez on Friday.