Ethiopia and Kenya: Doing it my way 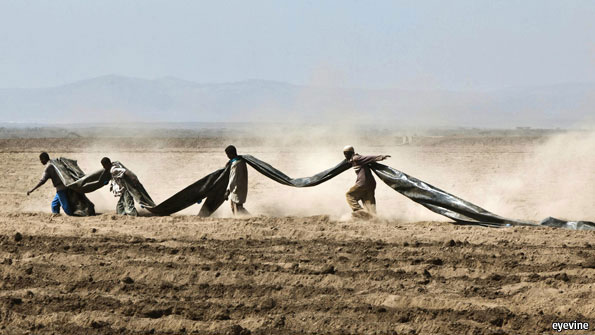 Ethiopia and Kenya:
Doing it my way

ETHIOPIAN BORDER GUARDS at the arrivals terminal in Metema check every passport against a handwritten list of undesirables to be kept out. This a country in which the state knows best. That may be tiresome for visitors, but it has made Ethiopia one of Africa’s development stars. A newly built road leading away from the border is surrounded by intensively farmed fields of sesame, Ethiopia’s second-biggest export after coffee. Golden bundles of harvested stalks sit on fields flanked by streams. It is a long time since famine-struck 1984, when Bob Geldof sang about the country “where nothing ever grows / No rain or rivers flow / Do they know it’s Christmas time at all?”

Now it is Christmas time in Ethiopia, up to a point. The country has a state-backed policy of boosting the economy and alleviating poverty, carried out by officials with near-dictatorial powers. Markets and foreign investors are allowed but mistrusted. The model borrows from China and is conceived as a rejection of Western free-for-all capitalism. It claims to nurture local employers and protect them from Wall Street predators. The government talks vaguely about moving to a liberal democracy in the future, but that is a long way off. The economy comes first. Meles Zenawi, the country’s late prime minister, developed a vision for the country of 85m that focuses mainly on improving its agriculture, which accounts for 46% of GDP and employs 79% of the workforce.

Some neighbours are following Ethiopia’s state-led development model, most notably Rwanda. Yet other African countries are taking the opposite approach. They have scaled back the role of the state and liberalised markets, embracing a Western model. Kenya, which proudly proclaims itself the homeland of the American president, leads the pack. It has attracted worldwide attention with its successes in telecoms and banking.

So which camp is doing better? The answer is not as straightforward as might be expected. The Ethiopians are more competent at running a big state than, say, the Soviets were. In the late 1990s they methodically set out their goals and have been implementing them with great discipline ever since. They co-ordinate efforts across the country and among departments. Officials monitor progress and change course if necessary. They welcome outside advice and manage to keep corruption remarkably subdued for such a centralised system.

This has produced impressive development gains. Ethiopia has gone from having two universities to 32 in two decades. It has put schools and clinics in most villages. According to foreign donors, infant-mortality rates have fallen by 40% since 2000 and under-five mortality rates by 45%. Ethiopia is still poor: income per person in 2011 was about $400, well below the sub-Saharan average of $1,466. But it has improved rapidly from a very low base, in part thanks to the efforts of the state and its sometimes unorthodox allies.

The official Agricultural Transformation Agency, which aims to raise farm productivity as well as farmers’ share of profits, is led by Khalid Bomba, a former Wall Street banker and staffer at the Gates Foundation. He says Ethiopia may become self-sufficient in food in less than five years, not least because it has amassed the biggest livestock population in Africa, with 50m head of cattle. Mr Bomba’s officials teach husbandry and planting techniques; they also organise co-operatives, distribute seeds, plan irrigation schemes and provide price information.

The results are plain to see. Travelling on the road south-east from Metema, a driver from the capital, Addis Ababa, makes an unannounced stop in a village and has a quick conversation with a farmer by the roadside. Then he drives off abruptly. “I was trying to buy a bag of grain for my wife but it’s no longer a good deal,” he explains. “It used to be 60-70% cheaper out here. The problem is these guys now all know the price in the city.”

Other parts of the economy have been transformed too. The driver is travelling on a smooth tarmac road following the Blue Nile, part of a nationwide roadbuilding programme. It was built in response to the 1980s famine, when plenty of food was available in fertile regions but did not reach the hungry. Alas, the road is mostly empty, with more cows than cars, even though this is the main highway for a region of 18m people. Restrictions on private enterprise are to blame. The government wants farmers to stay on the land rather than try their luck in the city where they might end up in slums and become disgruntled.

Critics have long asked whether Ethiopia’s success story can be believed. Even supporters do not have much faith in official numbers. Annual productivity gains in agriculture are probably not 5-6%, as the official statistics suggest, but more like 2-3%, though that is still impressive. An insider says: “Officials are given targets and then report back what superiors want to hear.” International experts are suspicious of the GDP growth figures of 11% flaunted by the government. They say the actual growth rate is only half that, around 5-7%—which is still respectable.

Critics also ask how much of the country’s economic growth reaches the poorest. To find out, your correspondent hired mules in the central highlands to trek to a series of remote villages at an altitude of 12,000 feet (3,660 metres). Rain lashes lean cows in the dying light as they return from mossy pastures above the treeline. Villagers herd them into straw huts perched atop a deep gorge and tie them up beneath beds mounted on wooden stilts next to an open fire. They are joined in the smoky, dark hut by goats, horses and chickens, all easy prey for jackals and hyenas if left outside overnight. Scientists say people have lived here like this for millennia, and think the region’s deep erosion gorges stem from deforestation caused by early farming.

Today villagers are as cut off as ever. The nearest paved road is several days’ walk away. However, in the past decade they have started receiving government support for the first time. A small state school now offers eight years of education and nurses provide basic health care. “A great gift for us,” says an old woman hunched over a fire. Yet what the government has given it is now threatening to take away again. Huts may be taken down, officials say, to make room for a national park that will earn income from tourists.

The trouble with a big state

The Ethiopian model—competent generosity combined with draconian controls—has run into trouble on several fronts. First, its finances are not working. Inflation reached 40% in 2011. It has now come down to around 15%, but at the price of choking off growth. Addis Ababa is full of half-finished buildings whose owners have run out of money. Foreign-exchange controls keep out much-needed imports. Dollar transfers are compulsorily converted to Ethiopian birr, as your correspondent found out when The Economist wired money from London.

Inflation is kept high by lavish state spending. Vast sums are pumped into roads, schools and hydroelectric dams, but Ethiopia cannot afford this largesse. Interest rates are kept low to reduce borrowing costs, but that discourages saving, exacerbating the shortage of capital. The government gets round this by obliging all banks to divert at least 27% of their loan book to the government. Every fix requires a further fix, though recent oil finds along the country’s southern periphery may eventually change that. The government also hopes new dams will turn it into a regional electricity exporter. But none of this will happen soon.

Nor would it solve Ethiopia’s other big problem. Keeping a large part of the workforce in agriculture is unsustainable in a population that has been almost doubling every generation. Farming communities tend to have high birth rates, and Ethiopia’s, at 4.5 per woman, is at the upper end of the African spectrum. This causes intense pressure on land. The average family plot has shrunk to one hectare, not enough to live well. In the half-mile-deep Blue Nile gorge, terraced fields of wheat, barley and teff (a grass with edible seeds) cling to steep hillsides. Every tiny outcrop is farmed by smallholders.

What Ethiopia needs is urbanisation, which generates new jobs and brings down family size. That requires capital, usually foreign capital. Setting aside their distaste for outside investors and their fear of losing political control, Ethiopian officials have tentatively encouraged private-sector development and a shift toward industrialisation.

Only some of this is working. About 80% of supposedly private business belongs to conglomerates controlled by state loyalists. The late prime minister’s wife runs the main one, EFFORT, which dabbles in everything from banking and shipping to metals, travel and cement, all without public scrutiny. Foreign investors are showing interest, seeing Ethiopia as potentially Africa’s fourth-biggest economy after South Africa, Nigeria and Angola. Travelling south from Addis Ababa the bus passes an Israeli strawberry farm that sells delicious produce by the side of the road. The strawberries come in 500g clear plastic containers just as they do in European supermarkets, where most of the harvest is heading. Some 600 fruit-pickers scramble through tunnels of polythene sheeting to pack the strawberries off to the airport. Farther south in Ziway, Sher Flowers, a Dutch firm, has built greenhouses covering many square miles and employs 12,000 people to grow long-stemmed roses.

But the road also passes the empty buildings of a dozen failed chicken farms. A few years ago foreign investors rushed into Ethiopia to lease agricultural land for commercial farming but encountered a series of obstacles. Land-lease periods were reduced retrospectively from 100 to 50 and then to 25 years. The government often seizes land to hand to investors, rarely consulting or compensating the residents, who are resettled without any say in the matter. Sometimes security forces are deployed to clear land. Army units are accused of beating, raping and torturing villagers who refuse to leave. Some of them fight back. Along the Omo river near the Kenyan border local tribes are battling against a sugar plantation on land they used to inhabit. Fighters wearing body paint and lip rings sit under an acacia tree holding their AK-47s. On December 28th government forces killed 147 of them. Would-be Western investors understandably worry about becoming implicated.

Manufacturing does not look a much safer option. An industrial park south of the capital, built with Chinese help, stands mostly empty. Workers say only 2,000 of the planned 20,000 jobs have materialised. Investors complain about the lack of skilled labour, logistics links and networks of local suppliers.