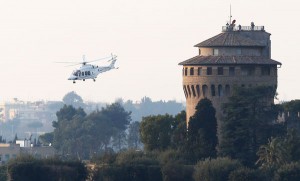 The papacy became vacant at 8pm (1900 GMT/2PM ET), marking the first time in six centuries a pope has resigned instead of ruling for life.

In a symbolic gesture, the Swiss Guards who stood sentry at the papal summer residence south of Rome, where the pope flew by helicopter less than three hours earlier, quit their posts and the massive wooden doors of the hilltop residence were closed.

At the same time, the papal apartments in the Vatican were locked and will not be opened until a new pope is elected.

As he left the Vatican several hours earlier by helicopter, he sent his last Twitter message: “Thank you for your love and support. May you always experience the joy that comes from putting Christ at the centre of your lives.”

Bells rang out from St Peter’s Basilica and churches all over Rome as the helicopter circled Vatican City and flew over the Colosseum and other landmarks to give the pontiff one last view of the city where he is also bishop.

“As you know, today is different to previous ones,” he told an emotional, cheering crowd holding balloons and banners after he arrived in the small town of Castel Gandolfo, where the summer residence it located.

He told the crowd, many of whom were crying, that he would soon become “simply be a pilgrim who is starting the last phase of his pilgrimage on this earth”.

He then turned and went inside the villa, never to be seen again as pope.

“I wanted to see him for the last time. I hope his successor follows in his footsteps. I feel very moved to be here,” said Giuseppe Ercolino, a 19-year-old student from a nearby town.

In an emotional farewell to cardinals on Thursday morning in the Vatican’s frescoed Sala Clementina, Benedict appeared to send a strong message to the top echelons of the Church as well as the faithful to unite behind his successor, whoever he is.

“I will continue to be close to you in prayer, especially in the next few days, so that you are fully accepting of the action of the Holy Spirit in the election of the new pope,” he said. “May the Lord show you what he wants. Among you there is the future pope, to whom I today declare my unconditional reverence and obedience.”

The pledge, made ahead of the closed-doors conclave where cardinals will elect his successor, was significant because for the first time in history, there will be a reigning pope and a former pope living side by side in the Vatican.

Some church scholars worry that if the next pope undoes some of Benedict’s policies while his predecessor is still alive, Benedict could act as a lightning rod for conservatives and polarise the 1.2 billion-member church.

Before boarding the helicopter, Pope Benedict said goodbye to monsignors, nuns, Vatican staff and Swiss guards in the San Damaso courtyard of the Holy See’s apostolic palace. Many of his staff had tears in their eyes as the helicopter left.

Benedict will spend the first few months of his retirement in the papal summer residence, a complex of villas boasting lush gardens, a farm and stunning views over Lake Albano in the volcanic crater below the town.

Benedict will stay until April when renovations are completed on a convent in the Vatican that will be his new home.

With the election of the next pope taking place in the wake of sexual abuse scandals, leaks of his private papers by his butler, falling membership and demands for a greater role for women, many in the Church believe it would benefit from a fresh face from a non-European country.

“At the past two conclaves, the cardinals elected the smartest man in the room. Now, it may be time to choose a man who will listen to all the other smart people in the church,” said Father Tom Resse, a historian and senior fellow at the Woodstock

Benedict, wearing the white papal cassock and red cape he will shed after his resignation becomes official, urged the church to strive to be “deeply united”.

A lover of classical music, he compared the Church hierarchy to an orchestra with many instruments which should always seek to be harmonious.

“In these past eight years we have lived, with faith, beautiful moments of radiant light in the path of the church as well as moments when some clouds darkened the sky,” he said, adding that he had “tried to serve Christ and his church with deep and total love”.

Once the chair of St Peter is vacant, cardinals who have assembled from around the world will begin planning the conclave that will elect his successor.

One of the first questions facing these “princes of the Church” is when the 115 cardinal electors should enter the Sistine Chapel for the voting. They will hold a first meeting on Friday but a decision may not come until next week.