Revere not the wicked ones, revere the virtuous!

Sometime in August, I shared a picture of a homeless man, which I took with my cellphone, here on facebook. What was very captivating about it was the sense of ease I read on his face. For those who bought into the idea of “loser” and “successful people”, which appears to be a ‘dominant world view’ as things stand now in the prospered and not prospered part of the world alike, the homeless guy that captured my imagination is kind of “looser.” Yet, the ease I read on his face appeared to me very mysterious!

This very story caused back and forth conversation (inbox) with a friend of mine of European background with whom I have exchanged views on different topics of political and philosophical nature.

His position about the picture I shared reads “…Freedom looks like that…”(imagine a homeless man) Well, it was thought provoking , and I didn’t yet finish the writing I started back then and I have no idea as to when I will go back to the business of struggling with that idea and finish the writing.

The picture (and story) I am sharing below took me back to that experience of struggling with idea of “freedom” and the qualities of human nature essential for ‘freedom.’ The thing is, in my view, people who value honesty and their conscience most are likely to end up being “unsuccessful” in the ‘conventional’ sense of the term “success.” Honesty has very little or no material reward.

What is even sad is that people who stick to values of being human – those who are morally upright, those who value their conscience most and care less for material- could even be equated with idiocy. Caring for conscience and honesty sometimes feel like, to me, spiritual ideals. As a Christian, what Jesus went through reminds me that. My readings in other religious books affirms this to me.

For me this man is brave! The reason I am saying so is that this man could have escaped what looks like destitution If he was willing to trade off his conscious for comfort. Besides naivety, my view may sound a little speculative but it is grounded on my observation of what could be said quite considerable cases. Many opt for leading a life of slavery (no matter how fancy it looks like and no matter how the state of slavery is given a different comforting image and name) due to fear of “destitution” or due to love of “comfort.”

Oddly enough, people tend to revere those who trade off freedom and their conscience for slavery, those with a remarkable pretentious quality, and those who afford a fancy lifestyle with a sordid gain. On the contrary, those who bravely lived for their conscience are despised simply because honesty and conscience do not garner material richness. Implication of revering the pretentious, the morally corrupt and wicked ones may mean triumph of evil over good. Of course, this will have a negative implication for fate of our country.

Seen from the trajectory of Ethiopian politics, this is how TPLF managed to dominate Ethiopian politics and economy! ‘Rewarding’ the morally corrupt ones (and by creating them at a level needed to sustain a regime of moral corruption), and punishing the wise and morally upright ones. The question is why is it that many appear to be willing to buy a morally corrupted world view and of life as something very desirable? This is in total , I mean total contradiction to the world view of those Ethiopians who managed to maintain a very sensible notion of freedom and a free country.
The story below could normally make people feel pity. It didn’t make me feel so. I rather venerated his bravery and wished just a few thousands of us were brave enough like him. We could have written not a history of theft and aspiration of ethnic supremacy but an incredible story of struggle for freedom and free our country from moral corruption. Yes, I want to be part of helping this guy but I am not doing it in a sense of pity! If we can read his life, it is an incredible story of courage, which is very essential for those who think in terms of struggling for freedom and saving Ethiopians! it does not narrate a story of defeatism. It narrates determination: It is a reminder of Ethiopian story! Rebirth of Ethiopian patriotism and consequent project of saving Ethiopia depends, I thing to a great extent, on which world view we buy? Moral sanity versus moral corruption, and if the former how determined are we to pursue it? Partly, if not all about, it’s about philosophy of life. 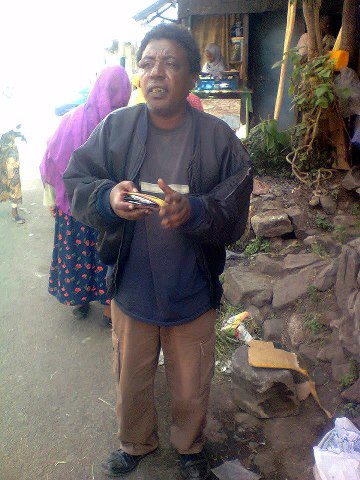 This was initially posted on  borkena blog

The writer can be reached at dbirku@gmail.com or on Twitter @dimetros