Not religious. It’s a political movement. own it!

November 21, 2012
Share
Facebook
Twitter
Pinterest
WhatsApp
Linkedin
Telegram
Viber
So goes the saying: “if it looks like a duck and walks like a duck, it’s a duck.” What if it does not look like an eagle but it really is an eagle, seriously? Despite its peaceful and somewhat slow paced nature, what the Ethiopian Muslims are undertaking looks like revolution. Defiance and determination are crucially important revolutionary qualities, and there is no dearth of them in the undertakings of the Ethiopian Muslims. A peaceful, sustained and determined defiance of the TPLF led regime political intervention in religion. It’s a revolution in progress. 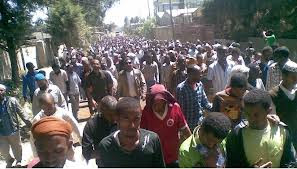